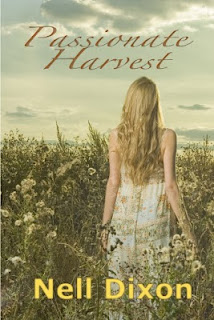 I'm getting quite excited now about the upcoming release for Passionate Harvest on May 21st. (A week today! eek!)To whet your appetites here's a little sneaky excerpt! Dominic paused on the step of Maggie’s house for a moment before pushing the bell. He’d lain awake half the night trying to work out all the different options for the future of the vineyard in his head. Despite sacrificing his sleep, he still had no answers. Whichever way he looked at it, whether Lucy decided to stay and work for a year or, if she decided to abandon her inheritance, the outcome couldn’t be good. He scarcely had time to lift his finger from the bell push when the door opened. “I’m all set.” Lucy lifted her lightly tanned arm to show him her sweater and bag. “Are you wearing flat shoes?” A flash of dismay crossed her face. “These are the best I’ve got with me. Obviously I only packed a few things.” She raised one leg to display a slender foot encased in a denim blue canvas wedge heeled shoe. “You’ll have to be careful when we walk beside the vines. The ground is uneven.” He opened the passenger door of the car for her. Lucy might have very pretty feet but he could only hope she wouldn’t twist her ankle in a rabbit hole in her impractical shoes. “Did Nick tell you anything about the vineyard?” He glanced at her. The morning sun streamed in through the side window lighting up her honey blonde hair like a halo. “He talked about it quite a lot. How many bottles he expected to get, about the shop and the craft place he had planned in the barn.” He heard her sigh, “I can’t believe he left me his shares though. It was a longstanding joke of his that he’d leave me a drink in his will, but this is crazy.” She shook her head as if still unable to take it all in. “He never mentioned his intentions to you?” Nick certainly hadn’t said anything to him. Dominic hadn’t liked to ask too much even when he could see Nick’s health was failing. He’d tried to bring the conversation round to it a couple of times but Nick would simply clap his hand onto Dom’s shoulder. ‘All taken care of. Nothing to worry about, I promise.’ He risked another peep at her as the traffic slowed. Her eyes were downcast and she worried the skin of her bottom lip between her teeth. “No, never.” She shook her head again and her hair shimmered in the sunshine like molten gold. (C)Nell Dixon 2012
Posted by Nell Dixon at 10:37 AM

Love it and can't wait to get it!