Tracy Krauss is an author, artist, playwright, director, worship leader, and teacher. Originally from a small prairie town, she received her Bachelor’s Degree at the University of Saskatchewan. She has lived in many places in northern Canada with her husband, a pastor, and their children. They currently live in Tumbler Ridge, BC.

Published works include four romantic suspense novels: AND THE BEAT GOES ON, where archeological evidence for creation comes at a heavy cost; MY MOTHER THE MAN-EATER, the story of a ‘cougar’ who takes on more than she bargained for; PLAY IT AGAIN, about an unlikely match during the 1980s rock n’ roll scene; and WIND OVER MARSHDALE, where strong spiritual forces rock a seemingly peaceful prairie town. She also has several stage plays in print. Visit her website for more details. http://www.tracykrauss.com 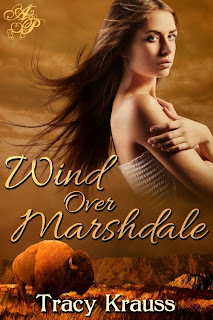 Marshdale. Just a small farming community where nothing special happens. A perfect place to start over… or get lost. There is definitely more to this prairie town than meets the eye. Once the meeting place of aboriginal tribes for miles around, some say the land itself was cursed because of the people’s sin. But its history goes farther back than even indigenous oral history can trace and there is still a direct descendant who has been handed the truth, like it or not. Exactly what ties does the land have to the medicine of the ancients? Is it cursed, or is it all superstition? Wind Over Marshdale is the story of the struggles within a small prairie town when hidden evil and ancient medicine resurface. Caught in the crossfire, new teacher Rachel Bosworth finds herself in love with two men at once. First, there is Thomas Lone Wolf, a Cree man whose blood lines run back to the days of ancient medicine but who has chosen to live as a Christian and faces prejudice from every side as he tries to expose the truth. Then there is Con McKinley, local farmer who has to face some demons of his own. Add to the mix a wayward minister seeking anonymity in the obscurity of the town; eccentric twin sisters – one heavily involved in the occult and the other a fundamentalist zealot; and a host of other ‘characters’ whose lives weave together unexpectedly for the final climax. This suspenseful story is one of human frailty - prejudice, cowardice, jealousy, and greed – magnified by powerful spiritual forces that have remained hidden for centuries, only to be broken in triumph by grace.

Tracy kindly agreed to be interviewed as part of her stop here: 1. Most authors are also big readers. Do you read the same genre that you write? and which book has influenced you most in your desire to be a writer? Actually, I don’t write my favourite genre which is spec fiction or Sci-fi. When I was a teen all the girls my age were reading YA romances while I was heavy into Edgar Rice Burroughs (Tarzan – all 30+ of them...) I was in love with Spock and had Star Trek posters in my room instead of the latest teen idol. My tastes really haven’t changed. I love a good Spec/ Sci-fi/ Fantasy/ Paranormal book with a really twisted ending. The irony is, I don’t write in this genre. I write Romantic Suspense, but I do try for an element of surprise at the end. After what I just said, it probably sounds out of sync to say that Lucy Maude Montgomery’s Anne series may have inspired me to follow my writing dreams. Anne is a strong heroine who loved to write and followed her dream by submitting her stories. There are so many inspiring authors it’s hard to pick one. I think I was also inspired early on by C.S. Lewis and Margaret Atwood. Lewis for his imagination and Atwood for her ability to tell her story her way.

2. Are you a plotter or a pantser when it comes to writing your book? I always start off as a ‘plotter’. I like to create detailed character sketches and I outline the basic plot. Then as I get going, things evolve and change so a lot of the ‘panster’ comes into play as well. I go through multiple rewrites, that’s for sure.

3. If you were giving a dinner party which four fictional characters would you most like to invite and why? Sherlock Holmes, Spock, Lizzy Bennett, and Festus the fool from ‘Twelfth Night’. All of them have a very keen intellect and while the first two are sparring over details and technicalities, Lizzy and Festus could make fun of them with sharp witted comments. It would be fun to watch. Of course, I’d probably have to invite them out somewhere since I really don’t enjoy throwing dinner parties and they might not like my cooking. (I’d like the sharp witted comments directed at one another, not my culinary abilities.)

4. What are you working on next? I’ve got two novels that need polishing up and which I hope to submit to my agent by the end of the summer. I’ve also got three new stage plays coming out sometime this year, so I’ll be busy promoting those. I also have a children’s book which I’ve illustrated which I’m in the process of shopping around.

Thanks, Tracy, that was fun and the book sounds great. You can get Tracy's book from: AMAZON or you can find her on Facebook or Her website.

Thanks for allowing me to guest on your blog, Nell. Hope your summer is a super one.

You sound as prolific a writer as Nell, Tracy. Wind Over Marshdale sounds really good. Best of luck! :) x

Loved the interview, ladies, Tracy your output is staggering. Best wishes with all your new releases and projects.

And here I feel like I need to step it up a bit!

Nice interview, Tracy. You have a lot to offer your readers. I wish you much success.

I'll admit, I've always liked the fool in Twelfth Night... wisest character in the cast. Of course, that's my favourite Shakespearean play to begin with....

Congratulations to both of you for an interesting interview. Your new book sounds intriguing, Tracy, so I'll have to put that on my list. Thanks, Ladies of the Pen.