It registered at -5 this morning when I took the eldest belle to catch her train for college. I don't do cold, in fact for most of this week my brain and my fingers have been frozen. Not helpful when I'm incredibly busy both with the day job, my writing and with the belle's stuff.
Making Waves will be released a week tomorrow! Eek, this is the reprint from A Taste of Summer but I am so excited about it being back out there. Astraea Press Go Herelaunches tomorrow with it's first titles going on sale. If you like sensual romance that's firmly on the sweet side then head over there and check out the titles.
The finishing touches are being applied to another writing project I have cooking and there'll be an announcement about that in a couple of weeks. This is part of the putting the fun back into writing for 2011 project and is something I've been wanting to do more of for a while.
Somehow I'm working on three wips at the moment. Okay, so one is just a fuzzy fragment in the back of my head, One is going to be a novella and the other is a longer piece. I've lots of plans for this year. Now, if I could just find a few more hours in each day...
Posted by Nell Dixon at 8:52 AM 2 comments: 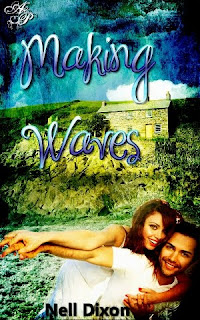 Out on February 8th from Astraea Press.
Posted by Nell Dixon at 10:07 AM 5 comments:

This came from a friend who knows my sense of humour.

The Washington Post's Mensa Invitational once again invited readers to take any word from the dictionary, alter it by adding, subtracting, or changing one letter, and supply a new definition.

Here are the winners:

1. Cashtration (n.): The act of buying a house, which renders the subject financially impotent for an indefinite period of time

2. Ignoranus : A person who's both stupid and an a**hole.
3. Intaxication : Euphoria at getting a tax refund, which lasts until you realize it was your money to start with.

4. Reintarnation : Coming back to life as a hillbilly.

5. Bozone ( n.): The substance surrounding stupid people that stops bright ideas from penetrating. The bozone layer, unfortunately, shows little sign of breaking down in the near future.

6. Foreploy : Any misrepresentation about yourself for the purpose of having sex.

8 Sarchasm : The gulf between the author of sarcastic wit and the person who doesn't get it.

9. Inoculatte : To take coffee intravenously when you are running late.

10. Osteopornosis : A degenerate disease. (This one got extra credit.)

11. Karmageddon : It's like, when everybody is sending off all these really bad vibes, right? And then, like, the Earth explodes and it's like, a serious bummer.

12. Decafalon (n.): The grueling event of getting through the day consuming only things that are good for you.

14. Dopeler Effect: The tendency of stupid ideas to seem smarter when they come at you rapidly.

16 Beelzebug (n.): Satan in the form of a mosquito, that gets into your bedroom at three in the morning and cannot be cast out.

17. Caterpallor ( n.): The color you turn after finding half a worm in the fruit you're eating.

The Washington Post has also published the winning submissions to its yearly contest, in which readers are asked to supply alternate meanings for common words.

And the winners are:

1. Coffee, n.. The person upon whom one coughs.

2. Flabbergasted, adj. Appalled by discovering how much weight one has gained.

3. Abdicate, v. To give up all hope of ever having a flat stomach.

4. esplanade, v. To attempt an explanation while drunk.

6. Negligent, adj. Absentmindedly answering the door when wearing only a nightgown.

9. Flatulence, n. Emergency vehicle that picks up someone who has been run over by a steamroller.

11. Testicle, n. A humorous question on an exam.

14. Oyster, n. A person who sprinkles his conversation with Yiddishisms.

15. Frisbeetarianism, n. The belief that, after death, the soul flies up onto the roof and gets stuck there.
Posted by Nell Dixon at 8:20 PM 3 comments: 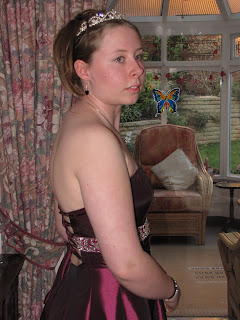 The eldest belle is 17 today - I am NOT old enough to have a child that age.
Posted by Nell Dixon at 4:25 PM 5 comments:

Zoom! Was that a week gone already?

Wow, last week went by fast! Eldest belle has her first lot of AS level exams this week - 7 exams - ouchie, it's her birthday tomorrow too. I am not old enough to have a daughter who has just sent for her provisional drivers license!
I wrote a staggering 8.5k in total last week on top of being out three nights with commitments and three and a half very hectic days at the day job. Writing short stories seeems to have uncorked my imagination. What I need now is more time to write down all the stuff thats whirling through my head. I'll probably do one or two more shorts this month and then start one of the novella's I have planned plus get going again on allotment wars.
I am loving my kindle - what I've found so far is that I am much more open to trying new genres and authors with it. So far this last week I read a YA - okay, a steamy historical - meh, an oldfashioned cosy detective - enjoyable, a Liz fielding - Fantastic!
Posted by Nell Dixon at 8:24 AM 1 comment:

It's snowing again. Eldest belle has gone to college, other two have gone to school, if this keeps up I can see me getting phone calls to go and collect them. Should be my day off today but I booked an appointment for the day job which looking at the weather I think I'll have to move.
Writing wise I'm off to a good start this year, I spent sometime once the worst of my flu was over sorting out some of the business side of my writing life. Still more to go but I feel really happy about the directions I'm taking this year. I finished revising 'An Uncivil War' and I wrote a 5k short story set in Venice which I'm actually quite pleased with. Again it's different from my other work, very romantic and wistful. I'm busy working on a few more short stories as it seems to be liberating my writing and firing me up again. I'm also working on a special fun project which you'll hear more about over the next few months. Then it will be back to writing Allotment Wars and hopefully a new short length novel too.
Posted by Nell Dixon at 8:31 AM 2 comments: