Todays the day! Christmas Ever After is officially out!!!! Available from Amazon.com and Amazon UK 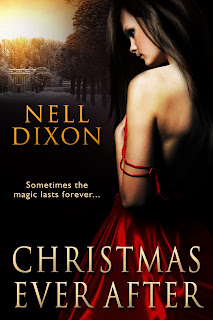 Lady Charlotte ‘Lottie’ Bellhavan is dubbed the runaway bride after calling off her wedding on the eve of her marriage just a week before Christmas. Her best friend, Sophie has the perfect hideout for the beleaguered society belle, her childhood home, Tything Manor. Lottie won’t be alone for Christmas at the isolated Northumbrian manor house, Sophie’s older brother, Ranulf, the reclusive Earl of Craigmore will be there too. Rafe is aware his unconventional looks and retiring nature won’t win any beauty contests but with the magic of the Christmas season and some judicious matchmaking from the meddlesome Sophie it might just be Christmas Ever After for Lottie and Rafe… And here’s a taster Charlotte picked up her mobile phone as if afraid it might bite her. She puffed out a sigh of relief when Sophie’s number showed on the screen. “Are you okay, Lottie?” Her friend’s anxious voice reached her as soon as she accepted the call. “I’m fine. I don’t think anyone will look for me here.” She tried to sound confident. Sophie was on enforced bed rest thanks to raised blood pressure caused by pregnancy and Lottie didn’t intend to raise her stress levels. “Phew. I’m glad you got out of London. It’s ghastly here. I’m afraid Tom’s done exactly what you said he would do. The story is all over the press.” Nausea rose in Lottie’s throat. “I’m not surprised. It’s what he knows, isn’t it? I don’t suppose it paints me in a very good light.” She tried to keep her tone cheerful even though she wanted to weep at the unfairness of it all. “I made Henry bring me the newspapers. The headlines are all variations on a theme. ‘Society belle abandons fiancé at altar,’ etc, etc.” Lottie pictured Sophie propped up in bed on a mountain of pillows wrinkling her pretty nose up in disgust as she spoke. “It wasn’t at the altar. It was the day before the wedding.” There was a rustle of papers as Sophie replied. “I know that sweetie, and I know you had very good reasons for calling the wedding off. I just wish you’d let me tell the rest of the world about some of them.” Lottie swallowed down the lump in her throat. She was so lucky to have Sophie as her friend. “It’ll blow over soon enough I suppose.” At least she hoped it would. She was glad that she was safely tucked away in Northumbria, out of the glare of the press spotlight. Tything Manor was well off the beaten track and few people knew of her connection with Sophie’s childhood home. “Rafe should be with you later today, he called in to see me on his way from the airport.” “The house is all ready. Food is stocked up and the oil for the heating was delivered yesterday.” She tried to remember when she’d last seen Sophie’s older brother, Ranulf. © Nell Dixon 2013
Posted by Nell Dixon at 8:41 AM No comments: