I thought holidays were meant to make you feel better. I'd been feeling tired since we got home but thought it was just from travelling, then today it hit me. Cottonwool head, drippy nose, hot and cold temps and an irritating cough whenever I try to talk. I guess this is my immune systems way of making me slow up for a week. Since I don't want to spread this around I called in sick, something I hate doing, but since I've only had one day off sick in 2 and a half years then I guess I haven't done so badly. Better a few days now than giving it everyone else and spending more time off.
It doesn't help that workmen have arrived just down the lane and started to Jackhammer the tarmac up on the road. Don't know if it's my head pounding or the generator.
Posted by Nell Dixon at 8:36 AM 2 comments:

Email ThisBlogThis!Share to TwitterShare to FacebookShare to Pinterest
Labels: illness

While I was gone

Well, the eldest belle managed to get 9 GCSE's A* to C grade and is enrolling in college this Tuesday. She's going to a local sixth form college and is really excited about starting her A level courses. The youngest belle is in France with her friend and is entertaining us with her daily texts. I'm busy ploughing through the laundry mountain. I had a lovely email from a reader telling me how much she loved Just look at me Know which made my day for me.
I also met some lovely people while I was away - a big Hi to Brix Books on the harbourside at Brixham and to Jill at Waterstones in Exeter. If you're quick both shops have a small amount of signed stock of my books but you need to be quick as they are going fast.
We had mixed weather while we were away but on the whole it was pretty good. All of us were sad to leave Devon, fingers crossed we'll be able to be back there again soon.
Posted by Nell Dixon at 6:56 PM 9 comments:

posting this from the lovely Shoreline cafe in Paignton while we wait with eldest dd for her grandparents to call with her GCSE results.
Posted by Nell Dixon at 10:01 AM 3 comments:

Email ThisBlogThis!Share to TwitterShare to FacebookShare to Pinterest
Labels: GCSE

Five go off to Devon 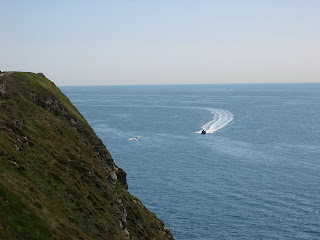 Hopefully this afternoon we're collecting the new to us towcar - a lovely Volvo XC90 in shiny metallic black - then we're finishing loading up the caravan and we're off tomorrow morning. Notes have been written for the house and fish sitters, Miss La's case is ready for when she comes back early to go to France with her friend's family. I still have my taxes to do but all the bits of paper are now in one pile in my office ready for me to check they've been entered in my notebook so I can fill out the forms.
I must remember to collect my holiday reading books from the boot of my car where I'd locked them to stop me reading them before I left. I've Veronica Henry's the beach hut and a collection of short stories from Maeve Binchy to look forward to. Should last me at least a day.
My Mum has her surgery this afternoon so all good thoughts for her are much appreciated
Posted by Nell Dixon at 8:38 AM 10 comments:

Email ThisBlogThis!Share to TwitterShare to FacebookShare to Pinterest
Labels: holiday

I seem to be swamped by paper at the moment. I'm getting euro's, sorting out all the stuff the youngest Belle needs for her French holiday with her friend. I'm gathering all the bits I need so I can do my tax return - shudder. We're changing our tow car so I'm chasing down all the documents for that as we'd like the new to us car before we go away on Thursday. I'm writing instructions for the house/fish sitters, supervising packing, finishing up my critiquing work and filling out my returns for Irish PLR which has to be in before the end of this month.
I thought this was supposed to be my holiday?
Still, on Thursday we're off to Devon to one of my favourite places, just outside Stoke Gabriel and I'll be surrounded by lovely rolling green hills and best of all I'll be by the sea. I can't tell you how much I'm looking forward to it.
Posted by Nell Dixon at 8:56 AM 1 comment:

Most of the appliances in my house are rather like me, a bit elderly, a little eccentric and inclined to work at their own pace. This week two of thenm decided to die. My microwave went first. It looked as if was cooking, the turntable went round, it made the right noises, the light was on but alas no cooking. Fortunately Sainsburys is having a sale so we picked up a lovely shiny silvery one for £50.
Next to go was the fridge freezer. I'd noticed for a while that the fridge was only slightly warmer than the freezer section and the light hasn't worked in it since 2004 but the final straw came when Mr Nell fetched his bottle of flavoured water out and discovered an iceberg the size of the one that sank the Titanic inside the bottle.
So, for the last few days we've been attempting to eat the contents of the freezer so we can get it all emptied out ready for the new one which is coming tomorrow.
It took quite a while to find a new fridge freezer because sometime in the last twenty years fridges have become fatter and of course we have fitted cupboards so fatter fridge freezer = not fitting in fridgefreezer sized gap. Luckily we managed to track one down that seemed like a good make.
I'm now eyeing the other kitchen appliances wondering which will be the third to go - or do you think the fridgefreezer counts as 2?
Posted by Nell Dixon at 7:19 PM 1 comment:

In a fit of madness last week I joined Twitter. As you know I went to Liz and Kate's very helpful workshop while I was at the RNA conference and then after so many people there kept telling me how wonderful it was I thought I ought to give it a go.
I am not very technical as you know and I can only access Twitter from my desktop since I bought my mobile phone in 2003, it doesn't even have a camera on it and no, I don't want to change it. I use it to make phone calls and that's it - bear in mind that due to my dyscalculia I can't text.
Twitter was always going to be a leap of faith. Well, at the moment I seem to be following 95 people and 60 people are following me - some of them are people who don't know me and will probably stop following me when they discover how boring I really am. It's a weird place the twitterverse. The only way i can describe it is that it's like going to a party and being in a room full of people, some you know and others you don't. Everyone is chatting, some in groups and some one to one. Clutching your glass of wine you look around for a friendly face and every now and then you catch someones eye and can answer a question or join in. The rest of the time you eavesdrop or talk to yourself, a bit like Shirley Valentine talking to the kitchen wall.
Hopefully I'll get better at it and feel a bit less wallflowerish. I downloaded tweetdeck and frankly am not impressed so far. I'll press on though and let you know how it goes when I've had a bit more practice - maybe I need to be less shy and retiring - and yes, I heard you all snigger when I said that!
Oh, and if you're there and I haven't found you then come and find me - I promise to say hello and show you where the peanuts are.
Posted by Nell Dixon at 1:43 PM 4 comments:

Well, actually it's been a pretty crap fortnight. Major stress in the day job, the company that employs Mr Nell went into administration - hopefully that's now been resolved and his job is ok, eldest belle still hobbling around on crutches, fridge freezer is on the blink and my Mom has now had a malignant cancer confirmed again, this time on her nose.
On the upside, Just Look at Me Now is out and selling well, His Darling Nurse is on kindle in the UK now and at least Mom's tumour isn't connected to the retinal cancer she had a few years ago and it sounds as if it's fixable. Mr Nell is still gainfully employed and, provided I don't have a nervous breakdown from all the stuff I need to do this week, I'll be off on holiday soon to Devon.
I might even write something while I wait for the verdict on Me, You and Him. I may even get the pictures from Jess's wedding downloaded sometime this century - sigh.
Posted by Nell Dixon at 4:02 PM 4 comments:

Email ThisBlogThis!Share to TwitterShare to FacebookShare to Pinterest
Labels: His Darling Nurse, Just Look at me Now, life 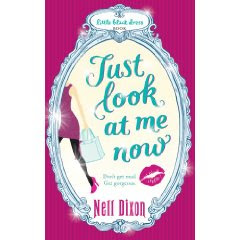 Just Look at Me Now is out today!
And in other news go HERE and congratulate my lovely and talented friend Judy Jarvie on her sale to Embrace Publishing! Judy, like me, is a former Moonlit author - there were some talented people writing for Moonlit and Judy is one of them!
Posted by Nell Dixon at 4:26 PM 3 comments: