Some of you probably know that Mr Nell and the belles bought me a Kindle for my Christmas/Birthday present. I was so excited, I'd wanted one for ages. I already read some e books when I had a laptop and it's prefect for when we go away in our touring caravan and Mr Nell makes grumpy noises about my cupboard being full of books instead of clothes.
What I hadn't forseen was how much I would love it. So far this year I've read 34 books, all but five have been on my Kindle. I read more widely now, YA, Christian romance, erotica, mystery, crime, sweet romance. I'm so there. Free books have been a great way for me to try new publishers, new authors, new genres. I've rediscovered old favourites - if Harlequin ever put the whole of Betty Neels backlist into e book format I'll be bankrupt. I've found new autobuy authors - Lorena McCourtney - the Invisible Ivy series is the Stephanie Plum of pensioners - with a dash of the God squad - brilliant. Books I've adored - Thirteen Little Blue Envelopes - a fabulous YA book and some which I've thought - what on earth??? Happily those have been very much in the minority.
I've loved being able to buy old favourites and have them with me wherever I go - I'm never without something to read.
I knew I would enjoy having a Kindle, I just hadn't expected to love it quite this much. How many of you have a Kindle, Nook or e reader? And are you loving it as much as me? Which new authors, genres or books have you found?
Posted by Nell Dixon at 3:22 PM No comments:

A huge big thank you 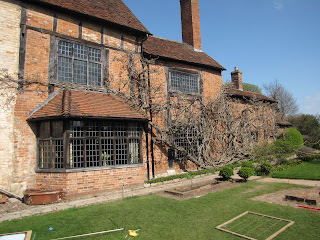 to everyone who has emailed, facebook messaged, twittered, myspaced and called me about the sale of Renovation, Renovation, Renovation to Myrmidon. I'm so very lucky to have so many lovely, generous and supportive friends.
Here's a little snippet of what the story is all about:-

After helping her live-in partner, former boy-band singer turned property developer, Steve Ricardo, renovate thirteen houses in seven years, Kate Michaels has had enough. When Steve impulsively purchases house number fourteen – the rambling and run-down Elizabethan Myrtle cottage – by using all their capital without consulting her, it’s the last straw. Kate had been expecting a romantic proposal and an engagement ring, not another renovation project. This time, as far as she’s concerned, the relationship is finished.
The only snag being that, with all their money tied up in Myrtle cottage and the property market on the skids, Kate has no choice but to stay in the house with Steve until the renovations are complete and the house is sold. Kate already dislikes the cottage, but when she starts to hear footsteps, snatches of conversations and music which is definitely of another era it really sets her nerves jangling. Wasps' nests, spiders and mice are one thing; ghosts are something else completely.
Posted by Nell Dixon at 2:39 PM 4 comments:

My Writing News - At Last!!

Publisher Ed Handyside: "Nell is a superbly talented writer and we're absolutely delighted to have her on board."

We arrived home yesterday. Had a lovely holiday, not really long enough sadly but still can't have everything. The weather was pretty good all week with the exception of Wednesday.
Coincidentally Wednesday was the fabulous Julie Cohen's birthday and we met on the Cobb at Lyme Regis at Midday with Julie, the Fecklet and the Rock God (Julie's son and hubby) for fish and chips on the beach. After a lovely, if a bit chilly, lunch we adjourned to the pub to warm up before hitting the town to cause chaos in Serendip - the bookshop. (Pictures to follow).The Fecklet was very taken with my eldest belle who has a sort of magic spell that she always manages to weave over small children. We had a nice few hours before the heavens opened.
We spent the week pootling around Sidmouth, Seaton, Lyme Regis, Honiton and one of my favourite places, Exeter. We did jigsaws, hunted for fossils, metal detected on the beach, shopped and visited the town museum. Lovely.
Posted by Nell Dixon at 9:41 AM 3 comments:

in the midst of my packing, trying to persuade the belles they really don't need a dozen pairs of shoes each, I have a book coming out. Dangerous to Know releases on Tuesday from Astraea Press If you could all just talk about it amongst yourselves or even buy a copy to keep a starving authors teenagers in shoes then that would be most appreciated.
To whet your appetites - here's a taster:

Jerome’s deep rumble of laughter at her answer caused a couple of people’s heads to turn in their direction.
“Touché!” He grinned. “So I don’t frighten you?”
“Like I said, maybe it’s you who should be scared of me.” She hoped the pulse she could feel fluttering wildly in her throat wasn’t visible.
His eyes twinkled. “And why should I be scared of you, Gemma?”
“Well, let me see. You’re a well-known bachelor of this parish and here am I, a dumped and desperate spinster.” Although her words were in jest, she couldn’t help but feel bitter towards her former boyfriend.
“You are much too lovely to ever be desperate.” His eyes locked onto hers and his lips brushed her mouth, warm and soft against hers, stealing her breath away. “And your ex-boyfriend was a fool to let you go.”
Startled, her words stuck at the back of her throat. “See, I could be luring you into my web.”
“Step into my parlour said the spider to the fly?” His lips were still only a few inches from her own and the sound blew soft on her face.
“Something like that,” she agreed. Gemma couldn’t believe the words coming out of her mouth. She had never flirted like this with a man before and every nerve in her body told her that with Jerome, she was playing with fire.
He stroked a finger down her cheek and she shivered.
“What if the fly were to ask the spider out tomorrow?”
“I don’t know if that would be a good idea.” Oh boy, she was in much too deep. In fact, she was more than in deep - she was probably drowning and with no hope of a life belt.
“I see.” He moved a little away from her and the tops of her arms chilled.
“I, um…” She tried to think of a good reason why she shouldn’t go out with him.
“If you tell me you need to stay in and wash your hair, I won’t believe you.” The corner of his mouth quirked and she knew he had called her bluff.
(C) Nell Dixon 2011
Posted by Nell Dixon at 7:54 PM 2 comments:

Email ThisBlogThis!Share to TwitterShare to FacebookShare to Pinterest
Labels: Dangerous to Know

Monday is my desk and errand day. It's when I sort out 'stuff'. It's amazing how 'stuff' builds up and multiplies in a week, kind of like dustbunnies under the bed or hangers in a wardrobe. I also turned over my calendar and realised I'm off to the seaside at the weekend - yay! I love being by the sea especially early and late season when there are just a few people around. I always feel inspired to write and read when I'm there. Fingers crossed we get a few sunny days, my middle belle has already found her metal detector ready for the beaches.
What settings inspire you? Are you a seaside person or more lakes and mountains? or perhaps you like to travel to foreign countries?
Posted by Nell Dixon at 10:56 AM 4 comments: 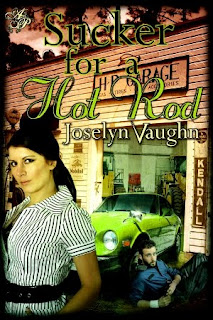 Please welcome my guest blogger for this week, one of my fellow Astraea authors, Joselyn Vaughn.

Joselyn, please introduce yourself to everyone;
I live in the Great Lakes State with my adoring husband, three energetic and ambitious toddlers, and two of the laziest beagles. I believe there is nothing better than a warm hug, a good romance novel and chocolate. When not changing diapers or removing a toddler from a precarious situation, I enjoy sewing, running, shopping at thrift stores and reading books longer than thirty pages. I have two other published books: CEOs Don't Cry and Courting Sparks.

Sucker for a Hotrod is a very unusual title, what's the story about?
Bryce Halloway only dates a woman once. No exceptions.
It gives him the reputation of a heart-breaker, but he can handle that as long as it keeps his mother, Dinah, from trying to marry him off. Judi Montgomery and her tempting ponytail finagle their way around official dates with car problems and driving lessons. She worms her way into his heart and entices him to want more from his life.
When health issues cause his father to retire, Bryce inherits the family-owned tractor repair shop. Can Judi’s love and encouragement give him the courage to break tradition and pursue his dreams of owning a custom hot rod shop?

Tell us more about the book, it sounds great, why did you choose to write this book?

The story started out about a car that couldn’t be fixed and then it evolved. Bryce’s story changed so much as I work. I thought he would be a cocky guy who thought he could fix anything and then I found out he wasn’t working on cars and he didn’t like where he was working. The story became much more about him than I thought it would be when I started.

W.S. Gager. Tanya Eby, JQ Rose, Jillian Grant, Julia Quinn, Meg Cabot, and many more. It’s so hard to remember all the authors I like.

Do you write to music or silence?

Does the Bob the Builder theme song count at music? I’m sure it isn’t silence. The kids are watching Dora right now. It’s my first experience with Dora and unfortunately I don’t think it will be my last. I find I get the most fiction writing done when there’s silence.

Do you have any more books planned?

I’m working on one focusing on the owner of the bed and breakfast in my first book. It’s been a lot of fun as well as a challenge. Minnie is in her seventies and has a lot more history behind her actions than other heroines I’ve worked with. She’s also the feistiest.

If you could take two fictional characters from any book out to dinner, who would you take and why?

Oh I don’t know. I think the main character from Meg Cabot’s Queen of Babble series would be fascinating. I would really like to know how she transformed the Scottish wedding dress. Maybe she’d have pictures. My sister does clothing alterations and has done some really cool transformations, like a men’s sweatshirt into a women’s dress. I think it’s fascinating. I’d like to hear more about this character’s work. And number two? This is so hard. How about Gilbert Blythe from the Anne of Avonlea series? He’s just so cute.

Thanks Joselyn for coming along to chat about your book, Sucker for a Hotrod sounds like a really fun read. It's available now for Nook or Kindle on all the usual sites plus Astraea Press
Posted by Nell Dixon at 9:44 AM 2 comments: