Well, there was a tiny dusting of snow overnight, but only enough to resemble a very heavy frost. The forecast predictions seem to show it passing all around us but not on us. I guess we'll have to wait and see if it moves further into the midlands. It's flipping cold here though. The fluffy socks are out and the belles have ransacked the coat cupboard to dig out scarves and gloves. Everything suddenly feels very wintery and Christmassy.
Posted by Nell Dixon at 10:42 AM 3 comments:

I have the most gorgeous new cover for the large print edition of Crystal Clear!
Posted by Nell Dixon at 8:16 PM 2 comments:

What happened in London - part 2!

We made to the party fashionably late thanks to the cab crisis so by then it was jammed with people. I mean literally jammed. It took us five minutes to locate the lovely Jan Jones and Roger Sanderson so we could sign in and collect our name tags and a rosette. This party was the final one for the clebration of fifty years of the Romantic Novelists Assoc. All those of us who had joined the association as unpublished writers, and had gone on through the wonderful NWS scheme to achieve publication become eligible for the Joan Hessayon award. In my year I think there were about 12 of us and the fabulous Fiona Harper was the winner. Winners of the award had very sparkly rosettes so Phillipa looked very glittery. We posed for pictures on the stairs which you can see over atJan Jones blog I'm at the back on the big group one and waving my hands around talking to my friend, Brigid Coady on another one. The evening whizzed past far too quickly and I missed talking to lots of people. People I did get to chat with included Cat Cobain, she bought my first LBD book, Blue Remembered Heels and I always enjoy talking with her as she is great fun and very wise. My fabby LBD editor, Claire, so excited to see her, Broo - who is Phillipa's agent, looking lovely as always. I met up with Sandra Forder, my good friend who I informally critique for and the ever glamerous Liz Fenwick, Cara Cooper, Catherine King, Diane Pearson, Lorelei Matthews, Lizzie Lamb and a whole host of other people.
The volume as ever was deafening so I struggled a bit to hear what people were saying and I was glad I'd left my walking stick at home as I probably would have legged someone over with it in the crowd. The drink flowed and the canapes were delicious especially after I accidently discovered the best spot in the room to stand to get offered them first - yum!
It was a fabulous party and Vik, Phillipa and I were buzzing as we left, like good little Cinderella's, a bit early to taxi across to the station and our ride home.
Posted by Nell Dixon at 8:44 AM 3 comments:

What happened in London

Vik, a friend from Wombourne writers, and I set off for Euston in time to meet my cp, Kimberley for lunch. Kim is an American, living in Italy and although we've been working together for a while now we'd never met. This is a special week though as her wonderful debut novel, Ask Me If I'm Happy was released from Diiarts press and she was over for the launch.
We met up at Euston and set off in a cab for John Lewis where we'd arranged to meet Phillipa Ashley, one of the coffee crew authors. Lunch lasted three hours that just zipped by in a flash. Kim is every bit a beautiful in real life as she is in her emails and we had a blast.
Once Kim had left to dash off to a literary event at Oxford, Vik, Phillipa and I went girly window shopping around the beauty department. Somehow we ended up in House of Fraser where the wonderful Laura, who was brilliant, gave us all a make-over with her gorgeous mineral make-up. (That is so going on my Christmas wish list).
Smelling delicious and immaculately made-up, Phillipa sprinted off for a meeting with her agent whilst Vik and I went in search of a cab to take us to Waterstones in Piccadily where we had been invited to a Tweet-up with Jane Holland, Talli Roland, Kate Nash, Jenny Bardon and Barbara Alderton. We were at the taxi rank when one of the cycle rickshaw cabs pulled in. So, we took our life in our hands and were pedalled away down Oxford Streets dodging in between the buses and admiring the posh shops and Christmas lights all the way to Piccadily.
We met up with the rest in time to celebrate Jane Holland's birthday which was made even better by a phone call from her agent telling her she had just landed a three book deal for her historical novels!
By the time we'd celebrated we were running late for the RNA winter party. We managed to grab one cab and half our party set off in that. Vik, Talli and I tried to find another cab. With time ticking on and no luck, Talli suggested we walk down to the Ritz as there were sure to be cabs there. Using her charm Talli then persuaded the wonderfully helpful doorman complete with his frock coat and top hat to stand out in the traffic and flag us down a taxi, so we were escorted into our vehicle in style.
After that came the RNA party and I'll blog about that tomorrow!
Posted by Nell Dixon at 3:23 PM 3 comments:

I'm off to London with fellow writer Vik Moriarty and we're meeting Kimberley Menozzi, my cp and author of Ask Me If I'm Happy (out this week, Diiarts Press) and Phillipa Ashley, author of Dating Mr December (out now with Source books) for lunch. Then after a spot of shopping we're off to the RNA winter party and I know loads of my friends are going to be there so it'll be fab to catch up.
Posted by Nell Dixon at 8:27 AM 2 comments:

Channelling a bit of Bowie. I'm being a busy bee at the moment making all kinds of changes to all kinds of things writing and non writing wise. You'll be seeing some new things hopefully on my website over the next few months and I'll be blogging about some of the things I have planned soon. I know, I'm such a tease!
First up though is to remind those of you who like large print that Crystal Clear will be released in LP format on December 1st. As soon as I see the cover i'll post it here for you!
Posted by Nell Dixon at 3:01 PM 2 comments:

The weather yesterday was really wild and I'm surprised there wasn't more damage when I drove eldest belle to catch her train to college this morning. I must admit I quite like lying in bed late at night and listening to the wind howling around the chimney. I always feel very snug especially if i have a good book to read.
Next weeks calendar is mad. I seem to be horrendously busy for the whole week including a trip to London on Wednesday to meet my cp, Kimberley Mennozi as her fabulous book, Ask Me If I'm Happy, releases this week from Diiart press. I'm travelling down with a friend from Wombourne writers and we're meeting Kim for lunch. Then later it's the RNA winter party. Very glam and exciting - well, the party will be, I'll probably be windswept and achey from schlepping around London all day but I'm so excited! It'll make a change from my usual outings which tend to be just to drop the belles off at various places.
Friday is my middle belle's birthday - she'll be 14. How did that happen? What happened to my cute little baby girl who cut her baby sisters hair when she was playing hairdressers? She used to say she wanted to be a ballerina hairdresser when she was small. Then her dream job was to work for Disney as Cinderella in the Disney parades, singing and dancing down Main Street. Maybe she hasn't changed too much after all.
Posted by Nell Dixon at 8:38 AM 2 comments: 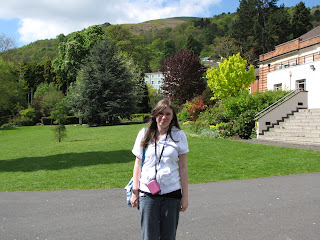 Congratulations to my lovely and talented middle daughter on being cast in her first stage play with Wolverhampton City Youth Theatre as the Envy Snake in their upcoming production of The Ashgirl in December!
Posted by Nell Dixon at 12:29 PM 8 comments:

I'm sorry, I know I've not posted for a while. I had one day between getting home from holiday before I had to sprint off to Oxford for a course for two days. We had a fab week away, we did some Christmas shopping at Clacton shopping village and at the designer outlet village near Stansted. We went metal detecting on the beach at Walton-on-the-Naze. We played bingo on Clacton pier with the caller dressed as a monk. We climbed to the top of the tower at Orford and walked around the walls of Framlingham Castle. We went swimming in the pool at the caravan site (indoor). We visited Frinton and went bird watching from the sea walls at Point Clear. We played scrabble, did jigsaws and laughed a lot.
In short we had a great time. What do you like doing best on holiday, and where is your ideal spot?
Posted by Nell Dixon at 8:40 AM 3 comments: