Murder at the Dolphin Hotel

Releasing December 11th, and available for preorder right now at all the Amazon's - my debut book as Helena Dixon. This is the first book of a series set in 1930's Dartmouth featuring Miss Kitty Underhay and her fellow sleuth, Captain Matthew Bryant. A room with a view… to murder June 1933. Kitty Underhay is a modern, independent woman from the top of her shingle bob to the tip of her t-strap heels. She prides herself on the reputation of her family’s ancient hotel on the blustery English coast. But then a body is found, rooms are ransacked and rumours begin to circulate that someone is on the hunt for a valuable stolen ruby – a ruby that Kitty’s mother may have possessed when she herself went missing during the Great War. Before she can do more than flick a duster, Kitty finds herself in the midst of a murder investigation. When the local police inspector shows no signs of solving the shocking crimes plaguing the hotel, Kitty steps briskly into the breach. Together with ex-army captain Matthew Bryant, her new hotel security officer, she is determined to decipher this mystery and preserve not only the name of her hotel, but also the lives of her guests. Could there be a cold-blooded killer under her own roof? And what connects the missing jewel to the mystery from Kitty’s own past? A classic page-turning murder mystery! Fans of Agatha Christie, Elizabeth Edmondson and T.E. Kinsey will love this unputdownable whodunnit. 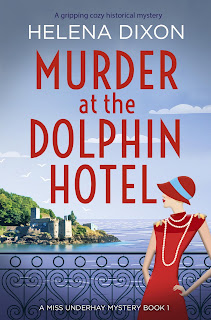 Posted by Nell Dixon at 8:53 PM No comments: