Brief Encounters is now just 99p on AMAZON for a short time. So if you haven't got a copy of our collection of short stories, two by me, two from Phillipa Ashley and two from Elizabeth Hanbury, then go get a copy! It's also available as a paperback - the perfect birthday, valentines or mothers day gift.
The other reason it's a fabby Friday is Elizabeth Hanbury, my friend and fellow coffee crew member has sold her book, A Bright Particular Star to Astraea Press. Four publishers wanted to buy and having read the book I can understand why. It's a gorgeous regency romp with a delicious hero and a minx of a heroine. Astraea Press recently had a NYT bestseller with another regency author so have a strong name for selecting beautifully fabulous regency tales for their list. A Bright Particular Star will be out in May and I can't wait!
Posted by Nell Dixon at 8:23 AM No comments:

It's that time of year when everyone gets the blues. Bills are in, money is short. All the work that didn't get done in December hits your desk and it's cold. But, on the upside, the days are getting lighter, snowdrops are open in my garden, PLR (Thats a small sum of money paid by govt to compensate for library loaning) has been announced and the holiday brochures are out.
I'm planning to crack on with Radio Gaga to get this last 10k done - I always procrastinate at the end of a single title. Then, I need to polish and submit my Easter short. I got a nice surprise to find A Cornish Christmas in Amazon's top 100 Romance short stories yesterday which was a real boost. I love writing the fun short novella's and I'm so pleased people seem to be enjoying them.
My Mum got a kindle for Christmas which means that because she can adjust the font she can now read all my books that weren't available to her before. She called last night to tell me she'd read Renovation, Renovation, Renovation. Gulp! Luckily for me she loved it and said she'd read some bits out to my dad and they'd been laughing out loud at some of the lines.(In a good way)
Posted by Nell Dixon at 8:48 AM 4 comments:

I thought I'd better give you all an update on where I am with my writing since New Year! I've almost half a brand new short and sweet story done which I hope will be right for Astraea Press. It's another New Bay set story so a couple of previous characters step in and out of the pages but the focus is on the outskirts of the town on a farm. It has a very lovely farmer called Noah and a city girl turned reluctant camper called Posy. Poor Noah is being tugged in all directions thanks to his matchmaking sister, Emma.
I've just 10kish left to go on Radio Gaga so that should be wrapped up in the next six weeks. Nice timing as Renovation, Renovation, Renovation gets closer to making it's print debut at the beginning of March.
I've managed to fit a bit of reading in too! Quite an achievement when I'm helping eldest belle revise for her A2 exams.
Posted by Nell Dixon at 1:17 PM 1 comment:

Email ThisBlogThis!Share to TwitterShare to FacebookShare to Pinterest
Labels: writing 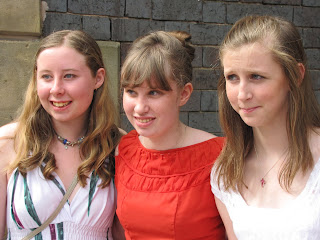 Eldest, middle and youngest
It's too early in the New year for me to think about the usual goals for the year. I never attempt my getting fitter, maintaining/losing weight until the middle of the month. That gives time for the goodies to go and life to settle down. This year is extra slow as my eldest belle will be 18 on Wednesday!
I can't quite believe the years have gone by so swiftly. She arrived by C section on a cold January day - overdue and breech, her hips stuck firmly in my pelvis so her hips were dislocated. She spent the first six months of her life encased in double nappies and a huge plastic casing to hold her joints in place.
It certainly surprised the vicar at her christening when I handed her over and instead of a squishly little baby he encountered the huge plastic splint. People were very weird when I was out with her too - one woman followed me all around the supermarket one day and threatened me with social services as eldest had been crying and the woman could see the splint. I swear she took my car reg as I pulled away.
Now she's all grown up, learning to drive, taking her A levels and planning her university course.
Happy Birthday, eldest!
Posted by Nell Dixon at 1:00 PM 6 comments:

I'm thrilled to be kicking off the New Year by introducing my lovely friend, Julie Day, author of young adult book The Railway Angel. Julie is a fellow RNA member and writes romance and young adult. She kindly agreed to be interviewed and to tell us a bit about her new book.
Julie, how did you become a novelist?
I became a novelist following recurring dreams in the night. This dream stayed in my mind during the day, and I realised the only way to get it out of my head was to write it down. Once I started writing, that was it. Ideas and more ideas came. That was over 10 years ago now.
Tell us what The Railway Angel is about?
The Railway Angel is about fifteen-year-old Lizzie, who becomes an angel after dying suddenly following a dare that goes wrong. She is sent back to Earth for a test, to stop another teenager from self-destructing and ending up like her. Along the way she finds she has magical powers, as well as the school she now belongs to. It is now free from Smashwords.
What inspired this story?
I think what inspired me to write it was reading lots of stories in the papers recently about teenagers and young adults doing silly things like running on tracks and doing other stupid stunts. I thought what would happen if they became guardian angels to other teenagers like them.
Any advice for aspiring writers?
My advice to aspiring writers is to keep persevering. You will find your own voice and what you like writing and when you do, you will find it easier to write those stories. Also, look out for different opportunities to get your work out there.
What do you have planned next?
I am working on the second angel story, which is Danny's story. He briefly appeared in Lizzie's story. I am also planning a series of adult romance ebooks with a touch of magic, both for a digital publisher and as an indie author. You can see what I like writing about, can't you? Magic.

Thanks Julie, the book sounds brilliant!
The Railway Angel
After a game of dare at a train station goes tragically wrong, fifteen year-old Lizzie Hammond becomes a lost angel, until she is tested and sent back to Earth to stop a teenager from risking their life on railway tracks, with persuasion and newly discovered magical powers. Passing her test, Lizzie now becomes a ‘Guardian Angel.”
Available from Amazon UK also Amazon US, Smashwords and other e-tailers. The perfect gift for a teen in your life!
Posted by Nell Dixon at 9:28 AM 9 comments: