A very warm welcome to my fellow Bookouture authors who write together as Verity Bright. Their Lady Eleanor Swift series, set in the 1920's has a new Christmassy edition today with the release of Murder in the Snow available from Amazon! https://bit.ly/2GRtSyc An English Christmas has mince pies, cheerful carols, a twinkling tree… and a murder? Thank goodness Lady Swift is on the scene! Winter, 1920. Amateur sleuth Lady Eleanor Swift is feeling festive. She is playing host to the entire village at Henley Hall for gifts, games and gingerbread. She’s also purchased perfect presents for each of her household – not forgetting the biggest bone in the butcher’s shop for her partner in crime, Gladstone the bulldog – and is looking forward to celebrating her first English country Christmas. As snowflakes fall, Eleanor is cheering on contestants in the traditional Christmas fun run in the grounds of the Hall. But tragedy strikes when one of the runners drops dead at the finish line. Dashing Detective Seldon is convinced it’s just a heart attack, but Eleanor isn’t so sure. When she finds a rather distinctive key where the man fell, Eleanor knows she’ll never rest until she finds out the truth about what happened in her own home. Next the vicar is taken ill with what looks like poison and Eleanor starts to wonder if the two cases are linked. When someone tries to frame her by planting poisoned berries in her own kitchen, she knows speed is of the essence. But the entire village was at Henley Hall for the festivities and Eleanor has enough suspects to stuff a town full of turkeys. Can she nail the true killer and clear her name in time for Christmas? 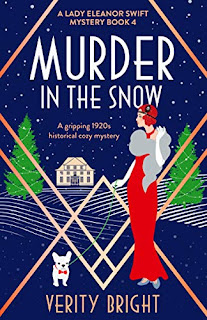 Audio version of Murder in the Bell Tower

I'm thrilled to tell you that the fabulous Alex Tregear will be narrating the audiobook version of Murder in the Bell Tower. Alex has done such a wonderful job with the other titles and I know you will all be delighted to hear that she will be narrating Kitty and Matt's latest escapade.

Murder on the Dance Floor is out!

Murder on the Dance Floor is finally out! Yippee and the cover has also been released for Murder in the Bell Tower

Posted by Nell Dixon at 3:38 PM No comments: